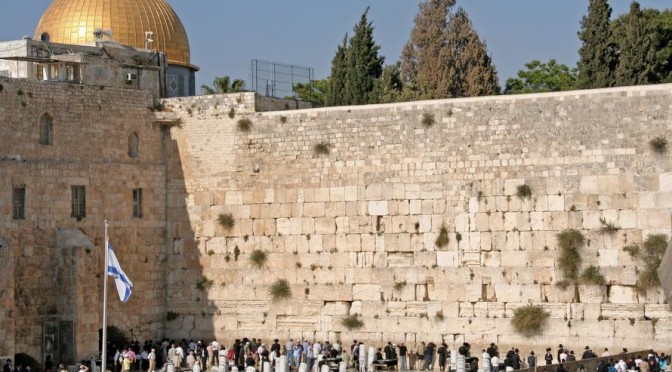 The Kings recent pronouncements concerning the actions taken by Israeli security forces on the Temple Mount are not only incorrect, but one step beyond the point of return. His statements took place at the new session of the United Nations General Assembly this past Monday. Recent violence taking place in the area that is supposed to be under the control and leadership of Jordan according to the Israeli Jordanian peace treaty, is very tactfully orchestrated. There seems to be a broader move to position the Palestinian cause ever more increasingly into the media to force the ever increasing lies that are forever spewed by people with either no knowledge, apathy, an agenda, or absolute malice.

It is my assessment however that what King Hussein has chosen to do is to actually sever the only link to his legitimacy in the region. If he forces Israel to take over that area, and prevent an ever escalation of violence, not to mention strategic and deceitful destruction of historical artifacts by bulldozing hundreds of tons of foundational Jerusalem’s old city, then the King will no longer have any connection to the righteous path of humanity. He will go the way of Assad, Muammar Gaddafi, Saddam Hussein, and others, many of them before him and our modern age that have made the ever fateful mistake of turning their backs on the Jews and Israel.

It is pretty obvious, if you hate the Jews you will not succeed in your life on any level. This portends to countries as well. Denying the Jewish and more importantly, spiritual connection to the area goes against the forces of life, well before and beyond the Muslim faith was a concept. The more you love the Jews and Israel, the higher and faster you prosper, your people live more healthy lives, happiness, purposeful lives, and an economy that in no time will become or maintains steady growth. The basic reason is Love. Love is a powerful motivator and brings light into a person’s life, further increasing an awareness to all things possible. Hate on the other hand is the darkness that envelops people, cultures, countries, economies, etc. that in the end burn themselves out. Have you ever seen any Jewish hating or Israel hating entity prosper? Name one. There are none, and the many that surround Israel are all slowly going the way of the sand dunes that they call home.

Egypt’s Abdel Fattah el-Sisi is the best hope for the region and Arab Islamic world, as he delicately promotes and balances rapprochement and cooperation with Israel as his country slowly gets back in gear. He too should begin to use words like Love Israel, and working with Israeli’s to increase their GDP.

The reasons for becoming closer to Israel are many, but for starters, Israel follows a path that goes directly to the core value system that every human truly wishes to follow, (Provided they can or are allowed to think and act for themselves before brain washing in the soup of Hate). Freedom to self-determination, self-responsibility, loving your neighbor as yourself, and a level of self-criticism and spiritual self-introspection to better ones self that actually leads to great countries like the United States of America and Israel. Imagine what the Middle East could look like if each country 67 years ago embraced the new country of Israel, and Palestine that was born after thousands of years of injustice towards the worlds Jews. I’m telling you that for 100% sure, you’d have a paradise like no other. But first, Love has to exist.

In Israel, most of the world doesn’t even understand the reality of so many Arabs proud or at least happy to be Israeli and work, shop, heal, and live in perfect peace and friendship in Israel proper. They know the alternative and what that would look like. They may not understand that Love is the answer and that is the umbrella that currently protects them. Their sick leaders who unfortunately are scared to stand up to what’s right, continue to let their people down as they follow the easy path to a paycheck, United Nations handouts, and succumb to threats of death by the same pay check handing out patrons, i.e., Iran and some other wealthy backers.

So, I call on King Hussein to step back from the brink and choose to be a true leader of your people and join a thoughtful discussion on the best way to manage and SHARE a space that is holy for Jews and Arab Muslims alike. Everybody knows that is honest, that the Jews were the first monotheistic group that inhabited this area. I have always said that if the Jews were originally better at Marketing, the world would be Jewish and there would be no argument, Christians, or Muslims. The Jews would have just cut off your head, arm, or killed you unless you convert. Seems like that’s a pretty powerful and successful way to get followers, right? This as well, is another post. Once King Hussein chooses to side with the purveyors of hate, lies, and insurrection, he then becomes trapped as they escalate their demands on his opinion and by then, Israel will be a much harder phone call to make. Israel is and always will be the best hope for mankind, the true canary in the coal mine, and the light among nations. The Torah is the foundation of all common law in the world, and nobody can deny that they feel better when they share Love vs Hate. King, choose Love.