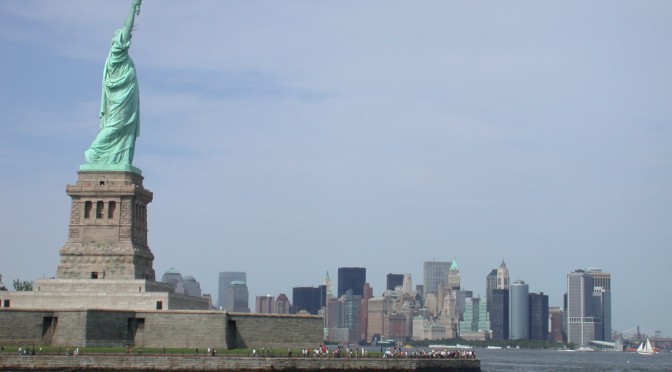 Why? Simple, if history is any indicator, if Iran were to nuke Manhattan, many in the media and on the left would immediately blame the Mossad, Jews, and Israel and increase calls to boycott all things Israeli for either directly or indirectly causing such an event. (Iranian mullahs read and listen to the news too and saw how Israel was blamed for 911 to their delight. Israel is even being blamed for the current refugee problems in Europe!) Tom Clancy many years before 911 wrote about planes piloted into the U.S. Capital, and yet, nobody in the Defense department considered the Twin Towers a critical U.S. infrastructure asset worthy of minimum protection. How do you spell Asymmetrical Warfare? duh, the U.S. deployed the tactic early on, remember the British and the early American colonial fighters hiding behind trees instead of standing up like ducks? Such a total defense of any and all towers in North America is easy, but few if any are protected even today. (Do you really think the new and shiny Freedom tower is actually safe? It is now a more powerful target, taunting the same lunatics.)

Now, here is why I believe Iran will not even try to attack Israel, simple, they know they won’t succeed. The Iranian Mullahs have been planning for more than 35 years their attack of the west. Their success in attacking Israel over the years even with total financial and military support for Hezbollah and Hamas and others like Fatah, PFLP, PLO, Muslim Brotherhood etc., have failed, the opposite has occurred actually but that’s another post. What they, the Iranians and their ilk, have seen is how Israelis are “crazy” resourceful and geniuses at defending their people and homeland, and are really hard to catch off guard (Awareness, again, another post). So, if you have one גsilver bulletג you donגt waste it on Israel (Name any other country that has the technology of system that can shoot down a bullet with another bullet?), you go after the arguably crown jewels of the U.S. and thatגs Manhattan, not the Pentagon or the White House even though many in DC would like to think they are so important or matter. Iran understands Branding, and the U.S. Brand is Manhattan, NYC, time square, the financial district, etc. with the White House, Pentagon, and the beltway area in general a tertiary or more tactical target, certainly not strategic.

The U.S. would never really גwipe outג any other country with another Nuke attack even if the U.S. were attacked.

Ok, so how might they attack, thatגs unfortunately even easier, imagine it yourself; how hard is it to attack the US? Well, if youגre going to do that, follow another Tom Clancy book/movie, also successful just like the first. You take your cool new toy, read nuke in a juke, youגve created, and stick it in a package bound for the port of Manhattan/New Jerseyגs Statue of Liberty Island, Ellis Island (Most likely currently in successful dry run for many years to enable the “package” to fall into the גsafeג category of no inspection required due to algorithms based on security risk assessments). With the recent success of Israelגs Iron Dome, the Arrow system, and other intelligence operations, they, the Iranians, know they have one shot, their silver bullet, better make it a game changer. Israel as a first target just doesn’t meet the level of green light for success. The U.S. has always been the easiest target and lord knows the U.S. debt ~ $20T U.S.D. and dollar value as a fiat currency is a tall tree with weak trunk, nice target to topple, wouldn’t be the first fiat currency in history to crash by a long stretch. By sneaking a nuclear device onto a large ocean going container vessel into the port of NY/NJ, they can claim ignorance and say that it must be ISIS or Al-Qaida, or even the Russians, but not poor little innocent Iran. It amazes me still to this day how they’ve managed to obviate their entire past history of terror sponsorship. (The Beirut Barracks Bombings on October 23, 1983, in Beirut, Lebanon (Yet another example of how asymmetrical warfare was deployed against the U.S. and due to U.S. military code of conduct and apprehension to escalate tensions by an accidental discharge of a weapon at the gate to the compound, the U.S. took it on the chin. Benghazi anybody?) was a huge blow to the U.S., only to have the U.S. pull all activities out and hand it over to Iran/Hezbollah. (Now Russia, but again, another post.))

What do you, the U.S. population do the day after God forbid such a disaster? The U.S. would never really גwipe outג any other country with another Nuke attack even if the U.S. were attacked. It just wouldnגt happen. Too many years of guilt after the albeit arguably justified WWII events. So, by the time the U.S. knew definitively that Iran was responsible, the U.S. would be well removed from a knee jerk impulse to retaliate. Imagine another 20 years of asking Iran what they want to join us at the modern table. So I would guess that around 50% of the U.S.’s population and 75% of the media, would still be speaking on all the talk shows about how Israel was somehow the reason or behind it. “We call on Israel once and for all, turn over the keys to your country, the illegal country of Israel to the kingdom to Islam.” Jerusalem and all the worlds holy sites, would become Islamic holy sites that pre-date any other monotheistic historical religious site, and there would be no political will to do much of anything especially to stop further aggression from the likes of the Sharia crowd that continues to grow in the face of no resistance just like a nice fungus, no building, only cultural and economic infrastructure destruction.

So, why do I say such things, well, after many years of watching things happen and not happen, i.e., preventative action replaced by cover my butt bureaucracy folks that don’t want to lose their job by offending any Politically Correct action or statement, I have to at least shout to anybody listening to be careful, dare to connect the dots, and don’t be fooled by a group of people who by their own law and religion, must lie to us “infidels” to gain our trust only to then stab us in the back with a sweet smile on their faceג¦ After all, their aim is not ours nor their cultural value system, rather it is totally foreign and very dark and scary. Stand up and stop this by simply being informed and aware. Action is in the hands of those charged with our survival and safety. Most of the time, the biggest heroes in history take the simplest action at the lowest level in the chain of command that then thwart the most deadly planned missions. Let you be that hero, and may God continue to protect us all from the dark forces that continue to creep ever into the fore.